I’m very excited to announce that Solamnia at War (SAW) first war was a huge success. Not only we won by a landslide with a score of 34 – 20 but we had a 100% participation. That’s right! Every single member used his/her two attacks and that’s the way we like it.
Our average destruction was 86.5%, the enemy’s only 66.8%. We had six 3-stars and Eight 2-stars.
Good job all of you who fought and won this first war:
Pixy, Dev, Ffynn, BCloveday, FeaineWed, AA1lb, $Ibuu$, Kuzeed, Dark Knight 64, Abdullah, Jetty Plane 12, SammieBeamen, Noe, ChiefGu$$yWu$$y… and me 🙂

Keep up the Good Job!

All our clans won their last war and ended them almost at the same time. We saw a net increase in participation in Solamnia which was able to crash its opponent with an astounding 63-6 which was an all time record for Solamnia both in terms of stars as well as battles fought (47 attacks used).

Pax Tarkas’ victory was very tight, our middle clan won by 1 star only with a result of 47-46. This fact alone should tell you how important it is for all attacks to be used. One less attack and we would have lost.

Unsurprisingly our youngest clan, Xak Tsaroth, won again taking home their 20th victory! Their score was 68 – 16. It’s a considerable drop from the 110 stars they are used to get but we had many members promoted up to Pax Tarkas.

We, the leadership, have made considerable efforts to maximize the attacks and diminish the no-show, like giving enough warnings before the war starts and creating Heroes Rest, a clan where you can move to if you want to skip a war, but all of you need to do your part or the only instrument we will have left will be punishment for not participating. I prefer to reward and acknowledge a good behavior, but we are getting really close to not having options left. From now on not participating in a war will be considered same as not donating, you know the consequences. I heard people complaining that in a war they are wasting resources. Well, if we lose then the entire clan wasted resources because of a few individuals. How should some of us feel, after donating 40 or 50 level 5 wizards to fill war castles and losing the war because YOU decided it’s not worth your time? What kind of loyalty is yours toward the clan? The same clan that keeps your caste full?

This is a game of loyalty, it really boils down to that, we have to help each other so please do your part as we keep growing and build the best clan ever.
But for now, let’s celebrate our week victories…

Once upon a time… ok, it was only about 20 months ago but it feels a lot longer… 12 brave individuals found each other in a clan, but nobody donated there except them, not even the leader! One of them, RideWyoming (that’s me, by the way) decided that it was time to leave, but he really liked some of his clan mates and didn’t want to lose them, so one day (it was actually a very cold and snowy night) he gathered them all up together and asked them to join him in finding a new home. Before leaving he gave each one of them a special stone, a magical stone that would allow them to stay in touch even at great distances, it was called the Stone of Ema-il. He searched and searched but no place seemed to be good enough until one sunny but chilly morning he arrived on an empty space surrounded by trees on three sides and a big lake on the other. He couldn’t believe his eyes, this looked exactly like the place he saw in his dreams. He also dreamt of building a clan so big and powerful that all other clans would fear. First he built a shack and improved on it, he called it a Taun-Hol, and he named this new land Solamnia. He used the magic stone to call his friends: the Giant Daithoden, the joyful and loyal Kender Dev, the Rock Monster Nero, the Fire Breather Fitz, the Invisible SZ and a few other and they set off to their new home. They were now the Knights of Solamnia. At first it was hard, with the twelve of them only to keep company and donate troops. New people would come but they wouldn’t stay long as they didn’t see the potential that the Knights saw, and for 3 months the number remained at 12. But things started to brighten up and, thanks to the recruiting efforts of the Giant Daithoden, the clan grew and grew and grew until one day the population reached the magical number of 50.

Stay tuned for another chapter in the Story of Solamnia

Xak Tsaroth has grown in very little time from a tiny clan to be used as overflow for Pax Tarkas to a full and very active clan with highly motivated players. I think both its big brothers, Pax Tarkas and Solamnia, have much to learn from the motivation of our brothers and sisters there. Xak Tsaroth has won, so far, 8 wars out of 10 (and one tie) and the level of war participation is by far the highest of all clans. So please join me congratulating our youngest clan for a very well done job. 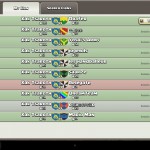 I’ve been reading around the Clash of Clans forums and their Facebook page and I see mixed feeling about the Clan Wars: some love them, some hate them. Some old time members left a clan because they didn’t like to go to war, other clans kicked out longtime members for the same reasons. Clan wars can be tough but I think when we all play they bring us together. It’s not a big effort, but it is a bit of an effort nonetheless. You need to fight 2 battles in a 24 hours span. What’s the big deal? None right?
We have been discussing strategies a lot but most members in all clans are missing it. We get together in the clan chat and decide who attacks who, it makes it more fun and increases our chances to win. So if you don’t usually do it, why not stop by, say hi and talk war? Ultimately our clans are all about long term standing, we aim to become the #1 Clan among all. If you love this idea then be active, if you don’t and you’re in Solamnia perhaps you are better off in another of our two clans or perhaps it’s time to say goodbye. Clash of Clans was always about clans and it takes a team work attitude to play, if this is not you perhaps it’s better for you to play on your own outside of a clan; but if this is you, we are working hard together to have fun and get stronger and kick some enemy clans butt.