I have seen this question many times: What troops should I use to attack in clan wars? This article is based on my experience as a Town Hall 7 and Town Hall 8 player.

Forget about Healers, Balloons and Goblins. I do not find them useful.

For early Town Hall 8, you are advised to aim for the following troops levels in order of priority:

The troop composition below have worked well for me:

Scenario 2 – 2 Layers of Walls to get to Town Hall

The troop composition in the table below has worked well for me. Ask for Wizards for your Clan Castle to complement your attack force.

The Barbarians and Archers are used to draw out the Clan Castle troops while the Giants and Wizards are the main attack force.

Release the Wall Breakers in 2 waves of 3. Wait until just after the mortar shots have landed before releasing each wave.

Scenario 3 – 3 Layers of Walls to get to Town Hall

The main difference here is that we use 3 waves of wall breakers instead of 2. Release the Wall Breakers in 3 waves of 3, 3 and 4. Wait until just after the mortar shots have landed before releasing each wave to avoid having your Wall Breakers getting decimated by Mortars.

Please evaluate your bases for strength of defense. You can Google base designs for your town hall level to get ideas, there are thousands of them out there.
Please do this ASAP, we need to make sure that this is done so if an opponent gets stars on us in a war those are earned and not given away by us.
Please do not leave TH outside of defensive walls it costs u greatly when this is done.

If you are not going to be able to participate in an upcoming war please leave and visit Pax Tarkas or Xak Tsaroth at least until the war has started. This will help a lot and please use both of your attacks when at war. I would like to see us institute a check in system through the website prior to wars and work it so that if you are not active and don’t respond within an appropriate amount of time to war notices you are kicked from the clan on a temporary basis with a message telling you that you are welcome back as soon as war has started. That way we can ensure 100% participation hopefully without causing discord among our clan. Please check the website, Line, and clan mail daily for messages and updates. Thank You!

Clan Mates,
Please look at this base. During the last war it was attacked 7 times by 7 different members of our clan. The best result was one star. Please discuss in the comments what kind of strategy you would use (what troops, etc.) The war castle contains Level 5 Wizards.
I’m still having a hard time understanding how 7 people could fail attacking what looks like a weak base: 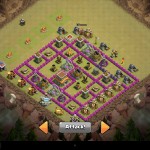